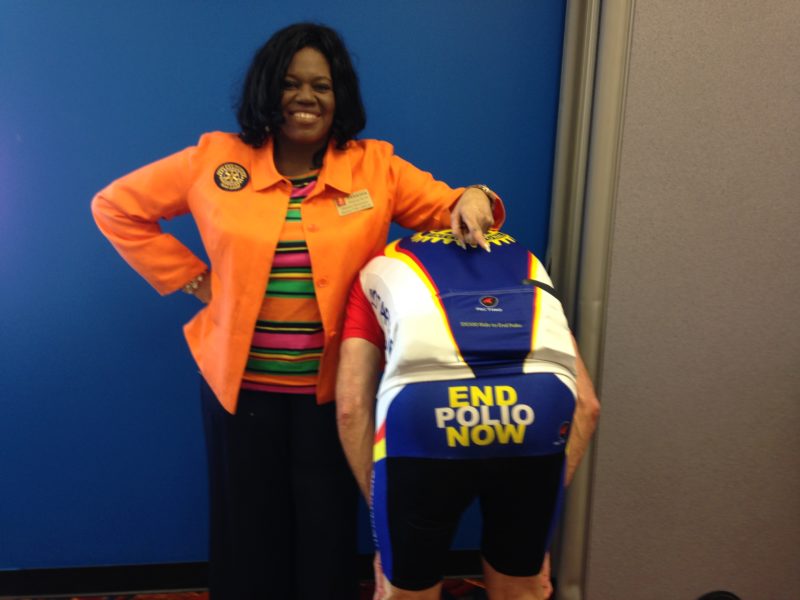 Past District Governor Vanessa Ervin joined Rotary to make a difference in her local community in eastern North Carolina, and at the time she believed that alone would be impactful. Twenty-five years later, she recognizes the global community she’s part of has impacted her even more than she ever imagined.

For thirteen years, Ervin participated in most every local project, committee and fundraiser she could. But it was her trip to the centennial convention in Chicago in 2005 that opened her eyes. “I personally observed the diversity of cultures in Rotary with more than 45,000 Rotarians from around the world,” she says.

“I heard the vast linguistic of conversation around me. I saw Rotarians dressed in their colorful native garbs. I witnessed the exchange of dialogue on buses and the avenues of networking. And I immediately knew I was part of something special.”  Ervin quickly realized her footprint of service would extend beyond her own comprehension.

During this convention, Ervin found her ‘voice.’ She went on to serve as chair of numerous club and district committees, and as District Governor in District 7730. She led a Vocational Training Team to India and a Group Study Exchange team to the Southern Caribbean, worked with youth exchange students and ambassadorial scholars, and led seminars and training for presidents-elect. Her current role is assisting with Public Image in Zone 33 and allows her to share her passion for her “Rotary story.”

“Rotary isn’t a ‘place,’” Ervin says, “but a way to demonstrate servant-hood to those around you.” Everyone who meets her would agree that Va

nessa Ervin is the epitome of service. “I believe in the five languages of love (by Dr. Gary Chapman) and my love language is ‘Acts of Service.’ My love language is demonstrated by those I serve with and those who receive the generosity of my servant-hood,” she adds.