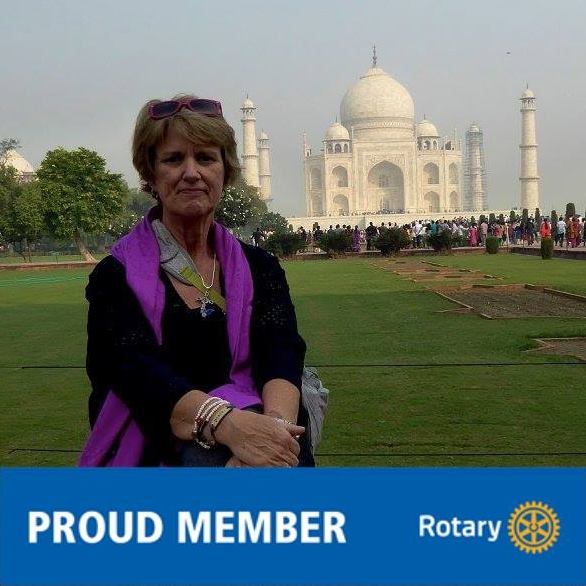 The old adage of “don’t miss a meeting or else you’ll be in charge next time…” obviously hasn’t sunk in yet with PDG Nancy Barbee. Since joining the Rotary Club of Maysville

in 2000, she has served in nearly every leadership position, including President…FOUR times!

But it was her first stint as President (2002-03) that she began her “love affair” with Rotary. “My eyes were opened in Greensboro, NC (at the Carolinas’ PETS Training) to the ‘internationality’ of Rotary,” she said. “There I found it was more than eating breakfast on Wednesday mornings and selling tickets.”

Nancy’s first trip to India to see firsthand the work of The Rotary Foundation was in 2001. She had the opportunity to watch a polio corrective surgery and that is where her dream began. In 2010, she led a team of 35 Rotarians from around the world to India for a National Immunization Day (NID). Since then, hundreds of Rotarians have also experienced the opportunity to provide the polio vaccine in India as part of the nine trips Nancy has led to India.

“It’s still amazing to me, the number of people I’ve met all around the world because of Rotary,” added Nancy. “I’ve never felt as if they are strangers because we all have the same mindset and a common thread of helping humanity.”

nor for District 7730 in 2009-2010 and has held numerous leadership positions throughout her district and zone. But if you ask her, the biggest highlights are still delivering those two drops that will keep a child from getting polio.  As an advocate for PolioPlus and The Rotary Foundation, Nancy epitomizes Rotary’s motto of “Service Above Self.”

“Meeting people all around the world has made me realize we are all alike…we really have the same feelings and needs,” she said, “and Rotary embraces those emotions. Rotarians lead with their hearts. They never ask ‘why’ just ‘why not.’”

**Nancy is active on social media and invites anyone interested in joining her on an upcoming NID to reach out via www.facebook.com/PolioNIDIndia or email nbarbee@gmail.com.